What’s in your indoor air?

For decades, indoor air pollution has actually exceeded outdoor pollution. And that’s because in a closed environment, synthetic materials in things like flooring and furniture, outgas, sending particles into the air. Some are harmful to health. Now, scientists at Virginia Tech are working to flag which ones are dangerous, so they can be replaced with safer materials. 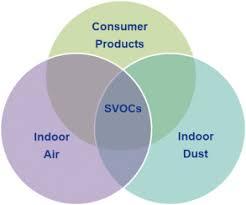 They’re known as SVOCs, ‘semi volatile organic compounds.’ When you walk on laminated flooring or jump around on a sofa that’s been treated with flame retardant, they send tiny particles into the air.  And since they’re in so many manufactured products, they can build up fast.

And then once they’re in the air they sort of adsorb to other surfaces, so they adsorb to the wall or the desk or to the dust in your house.”

John Little is a civil and environmental engineer, who’s working to come up with an international standard for safe exposure to the products in our homes and offices.  Not a simple task.

“The particles will even adsorb to your skin, and once they’re in your skin they can diffuse into the blood.  Or, they attach to the particles in the air we breathe so there’s many routes to exposure to these semi-volatile organic compounds.”

And one of the health effects, that worries scientists, is endocrine disruption. Little is spearheading what he hopes will become a group effort to create an international testing model to determine safe levels of exposure and to identify products that should be replaced with safer materials.

“These products are made all over the world now,” says Little, “and they’re traded all around the world, so we need a consistent way of estimating exposure, globally.”

The Environmental Protection Agency and the National Institute of Standards and Technology are helping to support the project financially.

Little is working with colleagues in the US, Europe and China. “We’re trying to come up with a sort of consensus-based set of exposure models so we can all agree that the models we’re using are consistent.”

It’s been decades since scientists have known about the dangers of SVOCs. “What I see, when I go to conferences is, everyone is saying ‘Oh there are these SVOCs in this product or they show up in polar bears in the Arctic, and no one really seems to be trying to solve the problem.  Now we’re trying to say, ‘OK, we’ve been studying this for long enough. Now we need to try to solve the problem.”

Little wants to make it clear, he’s not looking to create some kind of ‘worst offenders’ list.  “It’s not a name and shame thing.”  He says.

“It sometimes seems to me that academics and industry often seem to be in different worlds or in opposition; an adversarial relationship. I feel that we need to work together, so we don’t want to set things up where we’re penalizing industry. I prefer a collaborative endeavor where we work with (industry) and we say, “hey look, here’s what we need to change, and have them willing to work with us.”

Little will go to China this spring to work with an international team, on uniform standards for product safety worldwide. There are plans to present their findings at a symposium in Lithuania in August.