Ocean plastic predicted to triple within a decade

Without intervention soon, the amount of plastic littering the world’s oceans is expected to triple within a decade, a new UK government report warns.

The “Foresight Future of the Sea” report from the UK Government Office for Science said our oceans have seen “unprecedented change as a result of direct human activity and climate change.”  It identified the rise of plastic in oceans, along with rising temperatures and sea levels and chemical pollution, as some of the biggest problems the marine environment faces.  The report found that 70% of marine litter is non-degradable plastic which is projected to increase threefold between 2015 and 2025.  Experts suggested the government needed to be more strategic in its approach to the sea in order to successfully halt some of the long-term pollution issues.  “The major response is likely to lie in preventing it from entering the sea, introducing new biodegradable plastics, and potentially public awareness campaigns about marine protection,” the report said.
The UK economy relies heavily on oceans with 95% of trade traveling by sea. The report also suggested that the UK had opportunities to capitalize on the “ocean economy” (sea-based industries), which it says could double in size by 2030 to $3 trillion. “Both the opportunities and the challenges set out in this important report are global in scale and demand our urgent attention,” Foreign and Commonwealth Office minister Tariq Ahmad said in a statement accompanying the report.”We must keep pushing our scientific understanding of the oceans, harness new technologies, and support commercial innovation.”

Professor Ed Hill, Executive Director of the National Oceanography Centre, said in a statement that the report showed more research was required to understand the effect plastic pollution is having on marine organisms.
“There is still more work to be done to achieve greater knowledge of the marine environment and the impacts of climate change. This will be critical for making a success of the future that this report anticipates,” he said.
The issue of plastic pollution has become a notorious environmental subject over the last several years as researchers and activists have revealed it accumulating in areas of the sea and along once pristine coastlines. 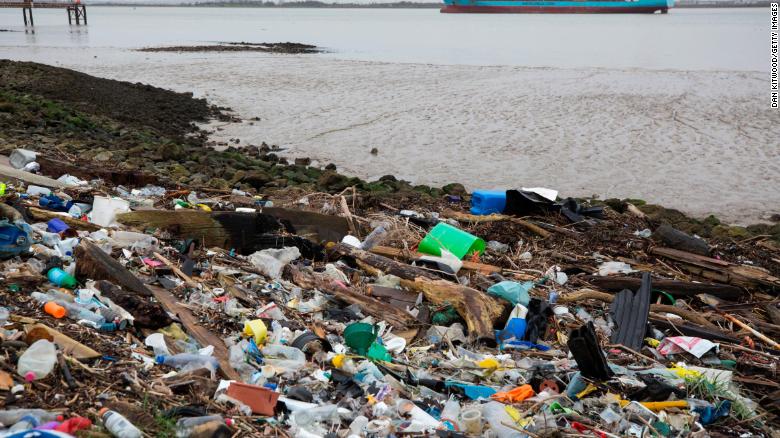 Plastics and other detritus line the shore of the Thames Estuary on January 2 in Cliffe, England.

Plastic has been found to choke marine wildlife, and has also entered the ocean food chain — exposing marine life to toxic chemicals that can end up in the food on our plates.
Around 150 million tons of plastic are already floating in our oceans — with an additional eight million tons entering the water each year, according to the World Economic Forum. It is estimated that by 2050 there will be more plastic than fish in our oceans by weight if current rates of plastic dumping hold.
In December, the UK was one of 193 countries that signed a UN resolution to eliminate plastic pollution in the sea. A month later the UK introduced what it described as one of the world’s toughest bans on microbeads, outlawing the manufacture of products containing the harmful plastic particles.
Share
0